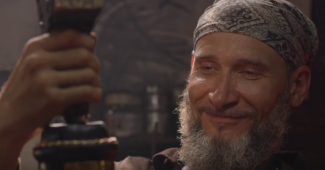 The leading role of the announcement of the 4th Rivne International Film Festival "Dream City" is the famous blacksmith Roman Veligursky.

On the Day of Rivne City, the organizers of the RIFF "Dream City" posted on the official Facebook page of the film festival a video announcing this year's film event.

The theme of the video work: Each of us contributes to the creation of the city of his dream, and each dreams that his work will benefit the city. It's hard to argue with that. Therefore, with faith in the longevity and development of Ravenna, these wonderful events are happening in it, and these events are created by ordinary people with love in their hearts and aspirations for new accomplishments.

Filming took place in the forge of Roman Veligursky. By the way, Roman is the author of awards in the form of cinemas, which are presented annually to the winners of the film festival "Dream City".

In the role of Blacksmith - blacksmith Roman Velihurskyi.

The fourth Rivne City Film Festival "Dream City" will be held in Rivne on September 24-28. At the opening of the film festival, on September 24, in the Kinopalats  Ukrayina, the audience will see Andrii Ivaniuk’s film "Eastman".