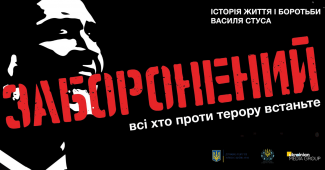 Roman Brovko's film "Forbidden" became a participant of the competition program of the 4th Rivne International Film Festival "Dream City". During the festival, the audience will see the film on September 27 in Rivne, in the Cinema Palace Ukraine.

The "Forbidden" big-screen rental was released on September 5 and is dedicated to the Vasyl Stus' death. The film was produced with the support of the Ukrainian State Film Agency.

…1965. The young poet Vasyl Stus cannot put up with the disenfranchised Ukrainians in the Soviet Union and challenges the totalitarian system. He talks about what millions are silent about. Despite the constant pressure and threats, Stus does not stop fighting even in exile. The real story of an unruly poet, a story of love and betrayal, human dignity and meanness...

The movie received scandalous publicity long before the premiere. The filmmakers were prevented from showing scenes with the deputy Viktor Medvedchuk, who was a public defender of Stus for 30 years ago. Although the scenes with the politician were defended, the filmmakers, as they noted, did not have legal permission to name Medvedchuk in the film.

As the creators of the script noted, they wanted, first of all, to pay attention to the greatness of Stus as an individual.

Fortunately, the viewers will finally see more than the court. I hope that the audience will discover new scenes, the pages of Vasyl Stus' life,

- said Artemii Kirsanov, an author of the script "Forbidden".

The soundtrack to the "Forbidden" has become the song "Lullabies" of the band "BEZ OBMEZHEN":

Vasyl Stus is a Ukrainian poet, novelist, translator, literary critic and human rights activist. He was one of the most active dissidents.

Because of he fought for the need to preserve and develop Ukrainian culture, he was subjected to repression by the Soviet authorities, his work was forbidden, and he was sentenced to long detention.

Vasily Stus died in a colony in the Urals on the night of September 4, 1985.