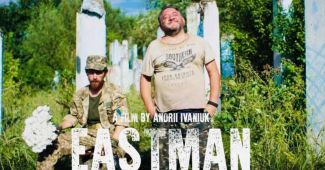 Andrii Ivaniuk's full-length film "Eastman" will be seen in Rivne at the opening of the 4th Rivne International Film Festival "Dream City". We look forward to seeing you at the Cinema Palace Ukraine on September 24. Starts at 18.00.

What is the film about? Producer Volodymyr Filippov wrote on his facebook page:

Zhadan: They say to me: you are an Eastman, a resident of Donbass, so you have to be wary.

This thesis is deployed in the film by Andrii Ivaniuk Andy Iva "Eastman", where the leading role played the unsurpassed Bohdan Beniuk.

This film is worth watching at any opportunity for those who are concerned about this topic, and I hope it worries every Ukrainian citizen. Because each of us has a question - what will be the next?

The premiere of Andrii Ivaniuk's film "Eastman" - both Ukrainian and world - took place at the Odessa International Film Festival in July this year. The main role in the film was played by Bohdan Beniuk. Although the actor is originally from Ivano-Frankivsk, that is, in fact, a Westman, he played the role of an Eastman and did it cool.

Director Andrii Ivaniuk is a veteran of military operations in eastern Ukraine. In an interview with Radio Svoboda Ivaniuk said that the tape refers to his fighting brother – a native of Donbass with the call "Beard". The film tells the story of one day in the life of two fighters - "Beard" and "Director". The prototype of the "Director" became Ivaniuk himself.