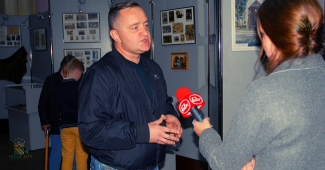 Last Thursday, on September 26, in the Rivne Regional Museum there was a screening of the movie "Josyp Patsula. Chosen from a Thousand". The author of the idea is a daughter of Josyp Patsula, Olga Nesterchuk.

Script writer and director Andrii Smus said before the screening that the film consists of two parts, each of which reveals a separate period of life and work of Josyp Patsula.

The film was presented in celebration of the 75th anniversary of the deportation of Ukrainians from Poland and the accompanying events of the program of the 4th Rivne International Film Festival "Dream City".