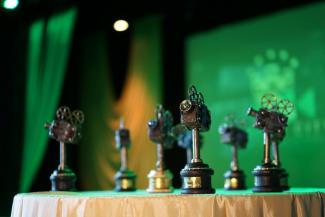 Rivne invites you to the event:

We strive to support and enhance the development of Ukrainian cinema and the promotion of Ukrainian films. We create a platform for free exchange of ideas between professionals, experienced representatives of Ukrainian and foreign cinema and those who are at the beginning of their careers and have great ambitions. We immerse all the guests of the film festival in an atmosphere of genuine communication and exchange of impressions from events and watching interesting films.

About 500 films from over 50 countries have been screened this year for the expert selection of the film festival. And only a few of them managed to get into the competition program.

With the support of the Ukrainian State Film Agency in 2019, we have the opportunity to implement a program to promote national films within the film festival. This means that there will be a lot of Ukrainian cinema in this year's Dream City - and that's great!

One of the highlights: Ostrog will be a special artistic location, so one day the film festival will be held there.

From the history of the film festival

What inspires us to hold a film festival?

Rivne. Its incredible history, its landscapes, locations and inhabitants. And our citizens' love to art. They go to the movies. They attend music, literature and other art festivals. They motivate themselves and friends to make the city better. They enjoy time together, leaving an emotional impact for the organizers and inspiring them to take on unique and exciting activities.

Every five days we immerse residents and guests of the city into the cinema atmosphere: meetings with famous actors and directors, master classes from film industry professionals, relaxing with friends and family in the movie theater, interesting news from the movies’ world.

Throughout its history, the festival has become one of the most important artistic and cultural events in Rivne, the region and the country. The event was visited by guests from different parts of Ukraine, as well as from Belarus, Poland, Czech Republic, France, Germany, Turkey, Switzerland, Norway, Israel, Canada and other countries.

215 films of Ukrainian and foreign production took part in the competition program of the film festival.

The winners of the Grand Prix of the International Film Festival “Dream City" were:

2017 – “War of Chimeras” directed by Anastasia and Maria Starozhitsky, Ukraine

The most interesting events of the film festival "Dream City" were: